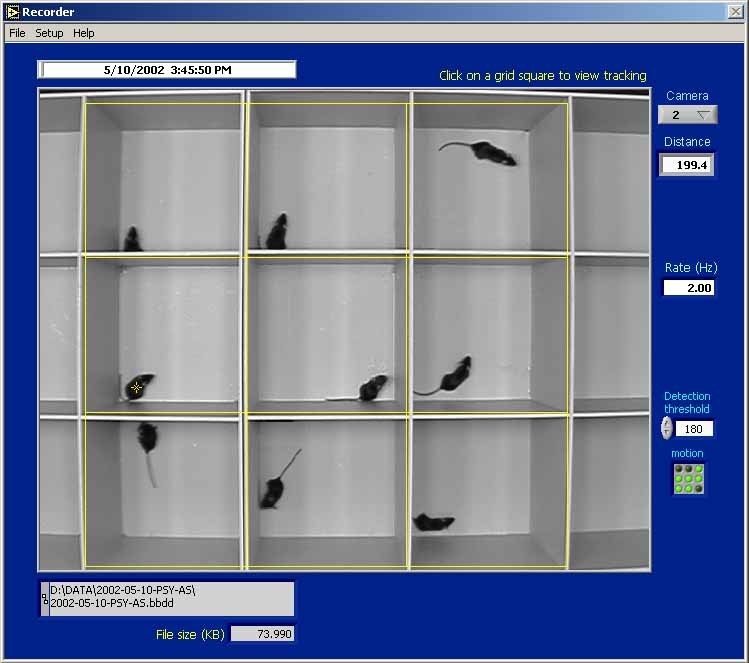 Affordable Video-based Activity Monitoring for up to 200 animals

Big Brother is a video-based activity monitor for behavioral neuroscience, neuropharmacology and circadian biology. Most conventional systems rely on switch closures triggered by running wheels, infrared beam-crossings, or burglar-alarm motion detectors. Such systems can be cumbersome to set up and run, and in some cases can be relatively insensitive. Big Brother tracks the distance travelled by each monitored animal using video cameras, reporting distance for each animal once per minute. The resulting data can be analyzed and viewed by the Big Brother Analysis Program. Or for long-term monitoring for circadian biology, records can be imported into ClockLab, the Actimetrics program for the field of circadian analysis.

Track up to 200 animals. A complete system includes a video acquisition board and 1-4 cameras. Up to 50 animals can be tracked with each camera.

Insect activity data collected with Big Brother. Easy setup and operation. Both the hardware and software for Big Brother are simple to install and set up. Installation takes only a few minutes.

Event markers for marking the time of drug application, environmental changes, etc. Multiple markers available for multiple treatments or events. Markers can be applied independently for each channel, or mark all channels at once.
Path tracking. Big Brother stores the complete frame-by-frame path of each animal for detecting stereotypy and other behaviors
Flexible. The image on each of 4 cameras can be divided into any number of zones, and the animal within each zone is tracked independently. Big Brother has tracked animals all up and down the phylogenetic tree, from drosophila to zebra fish to mice.
Affordable. Monitor animals for as little as $40 per channel.
High temporal resolution. Big Brother locates each animal up to 4 times per second (depending on the number being tracked). It calculates the distance travelled since the last time the animal was located, and adds the distance to the cumulative total for the current minute. At the end of each minute, the total distance is recorded and reset to zero.
Infrared Sensitive. Big Brother’s cameras are infrared sensitive, so that tracking can be done under infrared or visible light, or on a light-dark cycle in which the lighting changes from one to the other.
Extensive batch analysis. Export to a spreadsheet file or directly to an open Excel worksheet multiple analyses for all the animals in a file. For Circadian analysis, ClockLab also features numerous batch analysis

Below are records of 4 animals recorded simultaneously. The animals were given a drug at time 0, which significantly elevated their activity. Note that while the animals were recorded in the same run, they were not injected simultaneously. Instead, the user placed a unique event marker for each animal when the drug was given. In this display, the plots are aligned on the markers for better comparing the effects of the drug in synchrony. The markers are indicated by the green and red bar under the graph.

The Export menu gives numerous options for exporting various measures for each animal to a spreadsheet file or directly to an open Excel worksheet. 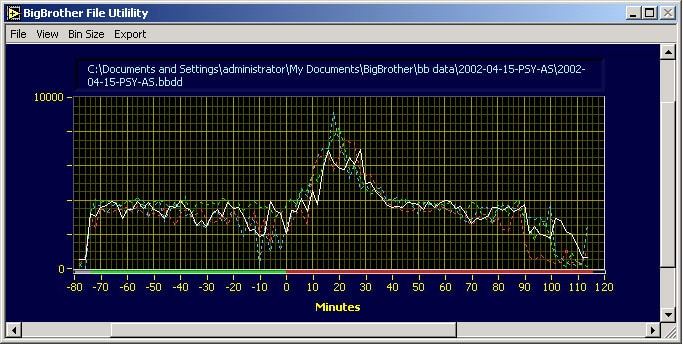 In this user’s setup, the program is monitoring 27 animals on 3 cameras. The view from camera 2 is shown. 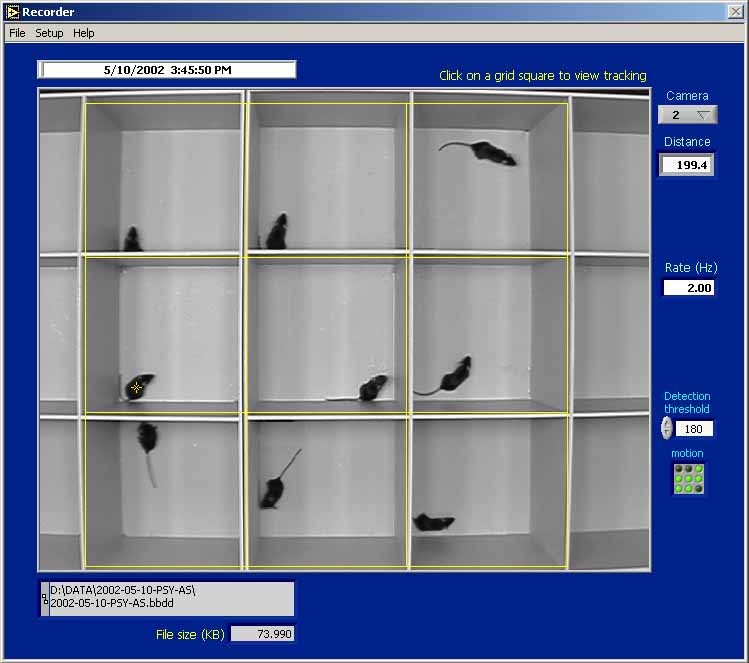