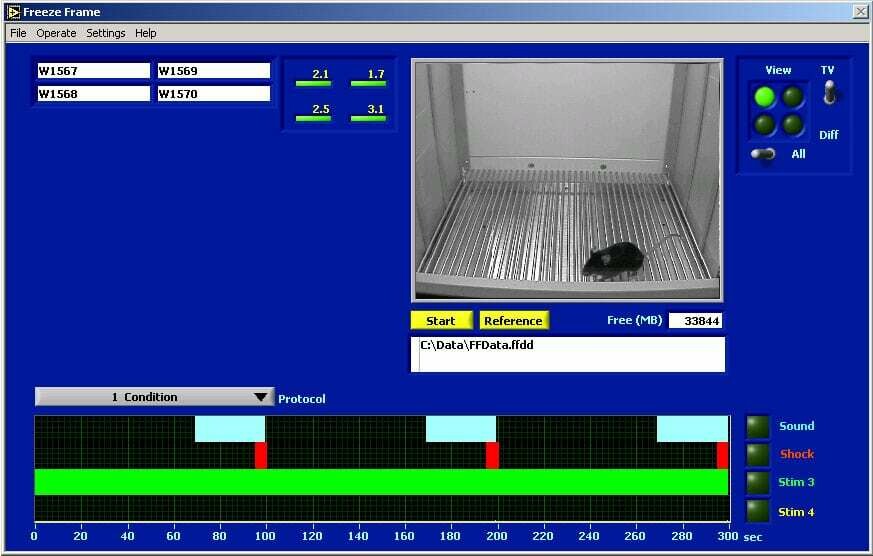 FreezeFrame, the first video-based system for fear conditioning, has become the standard in its field. It combines the sensitivity of the human observer with the objectivity and high throughput of automation. While infrared beams can detect gross movements of an animal from one part of the cage to another, FreezeFrame can detect the minute movements of grooming, sniffing, turning and rearing. And FreezeFrame monitors the animal at up to 15 times per second, not once every 5 seconds, for far more objective and reproducible results. FreezeFrame can also collect and process data for learned helplessness experiments, including Tail Suspension and the Porsolt Forced Swim Test.

Not a tracking system . A proprietary motion detection algorithm filters out shadows, light flicker and camera noise, and detects movements as small as 1 mm.

Multiple stimulus protocols can be stored and called up instantly for training and testing phases of the experiments.

New: FreezeFrame now supports pulsing stimuli at frequencies of up to 500 pulses per second and pulse durations as short as 1 ms.

Up to 8 individually controlled outputs. For each output, a +5V signal is available for controlling TTL-compatible devices and a +24V (400 mA) output can be used for controlling lights and other high-current devices.

Sounds (white noise or pure tone) are delivered through the computer’s sound card. Multiple sounds of different amplitude, frequency and quality (tone/noise or continuous/pulsing) can be delivered at different times during single trial. The shocker-scrambler is controlled directly from the computer, along with additional stimuli such as lights or external sound generators.

Save this product for later
Display prices in: EUR