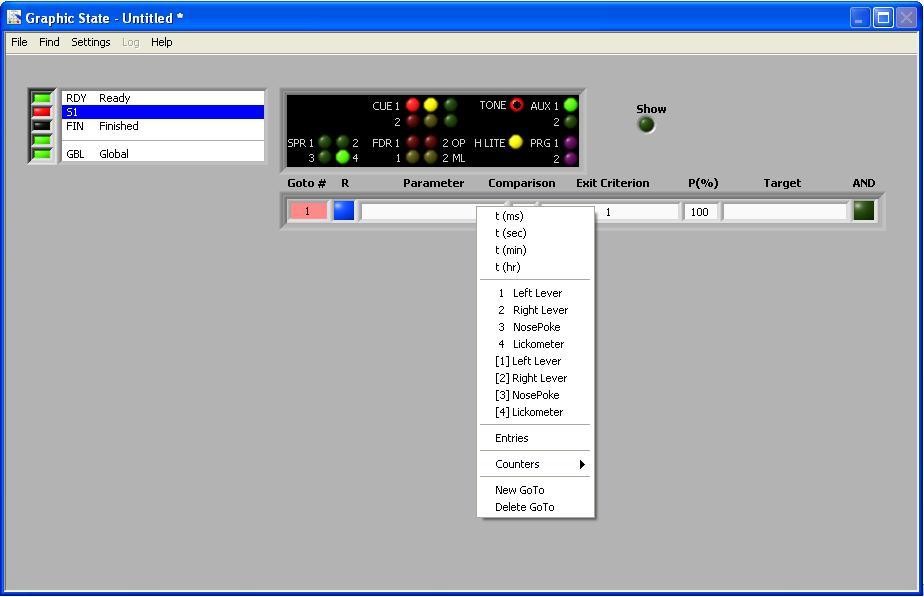 Coulbourn has enhanced the industry standard software for writing behavioral experiment protocols. Now, it is even easier to design the most complex experiments by simple point-and-click through Graphic State® 4 software. Designed to allow researchers to create interactive experiment-control protocols for behavioral experiments using state logic, Graphic State® 4 offers a new elegance with unparalleled power and incredible simplicity respect to software requesting users with programming knowledge. With a simple “point and click” the user selects options and represents the structure of each state graphically. Inherently user-friendly, the screen contains all the options and acts as a universal prompt. Any questions can be resolved by activating our context sensitive help screens. Graphic State® 4 structures the experiment as a series of states through which the experiment moves, with each state specifying a stimulus configuration in the test environment, a set of time and/or response requirements which cause the program to exit that state and progress to the next. The software indicates when each state and the entire protocol are logically complete so that the session cannot end up “hanging”, unable to progress to a Finish state. The software offers a complete data analysis structure with graphic and digital analysis in which counts, rate, latencies and durations can be created. A data file log in text format is included so the user can specify events to be highlighted and save for analyses in other programs. The USB Interface replaces the PCI interface for Habitest that can be interfaced to the computer through USB Port. One USB Interface is required per computer. The U90-11H USB interface is needed when Graphi State is used with the Habitest system and the U90-11T is needed for the TruScan system.
Graphic State 4 Users Manual

Graphic State 4 is a program designed to allow experimenters to create interactive experiment-control protocols for behavioral experiments using state logic. It is a conceptual extension and major improvement of state notation languages of the past. If you have used other state notation software before, you will move easily into using the Graphic State program. You'll find a new elegance in state notation with robust power and incredible simplicity. Graphic State uses a "point and click" screen that presents options to be selected by the user and represents the structure of each state graphically. It is inherently user friendly because the screen contains all of the options and acts as a universal prompt. You need not learn a language or remember what to type or how to type it for each option. It is all contained in each window. Graphic State 4 experiments or protocols are created in windows that lead the user through constructing states. This is done graphically by specifying stimuli, the elapsed-time and the input-event (response) variables necessary to exit each state and make a transition to the next.

Graphic State 4 will run on Windows Xp or Windows 7, both 32- and 64-bit, operating systems. A single USB port is all that is needed to interface as many as 16 completely independent stations. Update your Graphic State 2 or Graphic State 3 systems by simply adding the software upgrade and the USB interface. All of your other hardware, Habitest Lincs, Environment Control Boards (ECB), Powerbase and of course the Habitest Environments with a wide variety of stimulus and response devices as well as various cages, runways, arenas, etc., are all compatible with Graphic State 4.

Protocols are created in much the same way as its predecessors but there are many more options and the program is more Windows based employing right mouse clicks to access drop down menus and left mouse clicks to select the options. For example, a right click in the parameter box produces a list of every possible option that can be used to exit a state.

Once the parameter is selected (response, time, state entry, external counter or, with math enabled, a register value), the Criterion value can be entered as a specific value, drawn from a list of values, or again, with math enabled, set from a Register.

In Graphic State 4, flashing stimuli can be carried into subsequent states without interrupting the sequence, something not possible in previous versions of Graphic State. Flashing stimuli are indicated with a black circle in the middle of the stimulus.

The configuration of the Linc is specified when creating the protocol. Lincs are configured as:

Regardless of how the Lincs are configured within a protocol, a new feature in Graphic State 4 is the ability to run protocols with different Linc configurations simultaneously. For example Stations one through four could be running a protocol configured as a Half Linc per Station while stations 5 and 6 are running protocols with a configuration of one Linc per station and stations 7 and 9 might be configured for two Lincs per station. Access to the additional stimuli and responses are made available from the Protocol Settings in the - Settings - menu.

Indicators are provided to confirm communication between the hardware and computer. During a session, the stimuli in the display mimic the stimuli being activated in the environment, providing real time feedback as the experiment progresses.

Graphic State 4 includes a data log viewer and analysis feature used to view/examine the data, produce analyses of the collected data and produce graphic displays of the data recorded. The data analysis feature is accessed from the Protocol Builder program. Opening any data file displays the protocol, in the protocol builder, that was used in the experiment to collect the data being reviewed.